I am delighted to have a guest article by American writer and broadcaster Jerry Bowyer. This article was first published a few years ago upon publication of the final instalment of Harry Potter. With the release of the first part of the final movie, it seemed the right the time to give it a fresh airing ...
Warning this article contains spoilers. 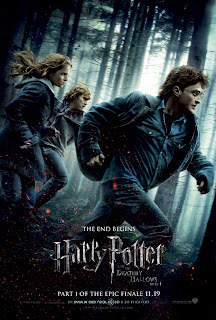 KKLA is the largest Christian talk radio station in America. I hold a dubious record there – I am responsible for causing the largest number of complaint calls the station had ever gotten in a single day. The topic? Harry Potter.

The Bowyers love Harry Potter: the novels, the movies, the video games, the midnight bookseller parties, we’re game for any of it. It didn’t start that way; ten years ago my mother wanted to give Harry Potter and the Sorcerer’s Stone to one of my girls as a Christmas gift. “No way,” I said. “We don’t do witches and wizards here.”

A couple of years later my mother-in-law asked the same question. By then I’d become a little less rock-ribbed and quite a bit more disillusioned with the religious right wing of the conservative movement. Gracie loved the books and started sharing the story with me. As I noticed more and more references to classical and medieval literature my guard started to fall.

Eventually I went to see the movie version with my whole family. When I left the theatre, I knew two things: first, that I had been an ignorant blow-hard. This wasn’t Wiccan propaganda: it was standard-issue fairy tale magic like Cinderella and The Wizard of Oz. Second, that Joanne Rowling had spent a great deal of time immersed in The Greats – the long line of literary masterpieces that range from The Lord of the Rings and Narnia back through Dickens, Austen, Shakespeare, the Arthurian Legends, the Church Fathers, the Scriptures themselves, and into the best of the pre-Christian Greek classics. In other words, Rowling was one of us.

Not long after that, I got to know John Granger and his book, The Key to Harry Potter, and I knew that I was not alone.

So I shared what I had learned with the radio audience. Harry is a lot of things. He’s a little bit Prince Harry forced to grow into the great warrior Henry V. He’s a lot more of the young Arthur, taken from his family at a young age, forced to live under the neglectful care of an inferior family, kept in the shadows of a bullying older adopted brother and unaware of his great origins. Eventually he is mentored by a great wizard (for young Wart, that’s Merlin; for Harry, it’s Dumbledore – a member of the Order of Merlin). Both lead quests to find a cup. Both (spoiler alert here- and from now on) end up procuring a great sword out of a lake in order to proceed with the quest.

I’m afraid the Arthur stuff doesn’t do much for many American evangelicals, though. It’s a little too British for Americans, plus it smells suspiciously Roman Catholic to a lot of Evangelicals. While I got lots of appreciative remarks, I didn’t make much headway with the fire breathers.

Next I tried the more recognizable Christian material. In Harry Potter and The Chamber of Secrets, Harry confronts Voldemort (whose name means “will to death”) by traveling down into a great cavern where he slays a serpent to win an (eventual) bride. He fatally wounds the serpent in the head. He’s rescued by a bird who descends upon him and the bride, a kind of bird whose “tears have healing powers, and who are able to bear immense loads.” The bird bears them up out of the cavern. “There, how’s that?” I thought. The problem is that very few Christians seem to be aware of descendit ad infernum, the descent into hell. Don’t the schools teach Dante? Don’t the Churches teach the Apostle’s Creed? Well, as a matter of fact, no, they generally do not. The Proto Evangelium, the first gospel in which God told Adam and Eve that He would send Someone who would rescue their descendents by crushing the head of the serpent doesn’t seem to get a lot of play either.

I could go on for page after page: snippets from ancient hymns and creeds for instance. The most powerful spell in Harry’s world is the Patronus, in which the wizard forcefully says “Expecto Patronum”. That’s Christian Latin for “I look for the Savior”. Expecto is used in the Nicene Creed, and Patronum is used in the medieval Dies Irae as the Savior that we look for in the day of judgment. Harry uses the spell when ghastly evil spiritual beings called DEMENtors (caps mine) attack him and another innocent man near a lake. A stag (which just happens to function as a common Christ figure in medieval art) walks across the water dispelling the vile soul-destroying creatures. What’s it take, a 2 by 4 across the forehead? This is Christian stuff!

Well, the 2 by 4 has arrived and it’s called Harry Potter and the Deathly Hallows. In it, Harry learns that the evil Voldemort has broken his soul into shards and used those shards to possess certain objects. These are called Horcruxes. One of them is a ring (Lord of the Rings fans should find this a little familiar) and as long as the object is not destroyed the ‘Dark Lord’ cannot be destroyed either. Well it turns out that one of those soul shards in imbedded in a scar in Harry’s forehead and Harry comes to understand that the only way the evil can be destroyed is for Harry to willingly give up his life. In order to save his friends at Hogwarts School (which we learn in book 7 reminds Harry of a church) and particularly his friend Hagrid (whose name is suspiciously similar to Hagioi, which is Greek for Saints) he must allow himself to be killed by the dark lord. He makes a long walk through a wood in which he stumbles (Via Dolorosa, anyone?) all the while being encouraged by a vision of his deceased mother Lily.

This might be a good time to tell you that the Lily is often used as a symbol for Mary, the mother of Jesus, in medieval literature. I have an album in my musical collection of exceptionally beautiful hymns about Jesus and Mary, called The Lily and the Lamb. Harry goes ‘as a sheep to the shearer’ to Voldemort, where he is killed. There he meets his old mentor Dumbledore (old English for bumblebee, a medieval symbol for wisdom based on Psalm 119). While Dumbledore explains it all, the great white cloud in which Harry finds himself begins to take the shape of a familiar train station. The station’s name is King’s Cross, which is also the title of that particular chapter of the book. Harry is given the choice of going ‘on’ or going back to save his people. Harry goes back and finds that since he willingly gave his life for the people of Hogwarts, Voldemort’s curses no longer bind them. Voldemort, then, is destroyed (by his own hand in an attempt to kill Harry again) and the various races and houses of Hogwarts celebrate in a great feast, in which they ignore the walls and divisions which had theretofore separated them.

Since this book has been published I have not seen a single apology to JK Rowling from any of the various fundamentalist bashers. She’d been accused of atheism (she’s an Anglican) and of being a witch (she knows nothing at all about the occult or Wicca).

Why no apologies to the lady? First, it’s always tough to say you’re sorry. But deeper than that, I think the problem is that so much of the religious right failed to see the Christianity in the Potter novels because it knows so little Christianity itself. Yes, there are a few ‘memory verses’ from Saint Paul, and various evangelical habits like the ‘sinner’s prayer’ and the alter call. However the gospel stories themselves, the various metaphors and figures of the Law and the Prophets, and their echoes down through the past two millennia of Christian literature and art are largely unknown to vast swaths of American Christendom, including its leaders.

Seven years ago, Joanne Rowling was asked whether she is a Christian. Her answer:

“Yes I am. Which seems to offend the religious right far worse than if I said I thought there was no God. Every time I’ve been asked if I believe in God, I’ve said yes, because I do, but no one ever really has gone any more deeply into it than that, and I have to say that does suit me, because if I talk too freely about that I think the intelligent reader, whether 10 or 60, will be able to guess what’s coming in the books.”

For once, I disagree with her: I don’t think they would have guessed the ending. Most of them can’t recognize the ending of the story even after it’s been told.

Oh, I almost forgot the radio station. Terry Fahy, the General Manager of KKLA, told me that he’d like to have me on the station again. So, you see, there are signs of hope after all.