Okay - so this is a song sung by Rangers fans for their 1961 win in the Cup Winners' Cup, but at least it is a song!

After spending a relaxing day or so in Shrewsbury, it was off to the next gig. Last night's events was perhaps the best yet. The Wulfrun Hall is a great music venue seating around 650 (and 1100 standing) and had an incredible vibe to it. as a rock venue they are used to providing 'riders' in the dressing rooms - probably normally lots of cold beer, Jack Daniels etc, so I think they were a little bemused for our request for a plate of sandwiches, some cans of coke and a few bottles of water!

The crowd were loud, excited and Rob was really on form. The show is now really sharp, and the impact of the stories just seems to hi home even more. My favourite part of last night was the venue manager telling us how he has never seen his hardened security and technical staff affected by something before. Apparently they were 'blown away'!
Posted by Ian Matthews at 7:43 am No comments:

Land of (their) Fathers

Tonight's event was at the Coal Exchange in Cardiff - a really grungy music venue in the Bay area. Previous appearances here included The Alarm, The Levellers, Van Morrison and Howard Marks, so Rob was in great company. The venue lent a really 'edgy' feel to the evening, and there was a lot more audience interaction than we have seen in many venues (Manchester apart ... but that is Manchester!).
We arrived into Cardiff around 2pm today, checked into the hotel and was able to spend a bit of time exploring the bay area - a redeveloped old dock and port, now a thriving commercial area with restaurants, pubs, the Welsh Assembly building, the stunning Opera House (with the stirring poem emblazoned on on the building in both Welsh and English "In These Stones/ Horizons/ Sing" - in welsh the word for sing here is Awen which means so much more than the English - it recalls Bardic tradition). We were able to relax and have some dinner looking out over the bay in some rare sunshine before heading off to the venue.
The building, The 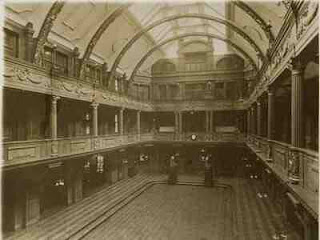 Coal Exchange, is over 100 years old and used to be, you guessed it, the Coal Exchange! That is, it is where the coal stocks from around the world were traded, and Rob performed on what was the trading room floor. Although all the redevelopment is great, I couldn't help but feel sad that this great music venue was going to be turned into expensive apartments for over-paid bankers!
Off to Shrewsbury today (my home town - I get to sleep in my bed!), where we are staying for the Wolverhampton gig.
Posted by Ian Matthews at 9:24 am 1 comment:

I racked my brain but couldn't think of any song reference for Southampton. Any ideas?

With Southampton we start the back half of the tour - just 4 dates to go now. Last night was at the Nuffield Theatre located on the Southampton University campus. A great theatre - about 500 capacity (and another sell-out) but feeling really intimate.

Rob has media interviews with the Tear Times (from Tearfund - see the last post) and Inspire magazine. We also all had chance to have some dinner with Delirious? (the band) and also a Pastor based here in Southampton called Billy Kennedy - see New Community, who is working with Oasis and Steve Chalke, working with some failing schools.

We head off now to Cardiff for tonight's event.
Posted by Ian Matthews at 9:17 am 2 comments:

Up to the rigs of London Town 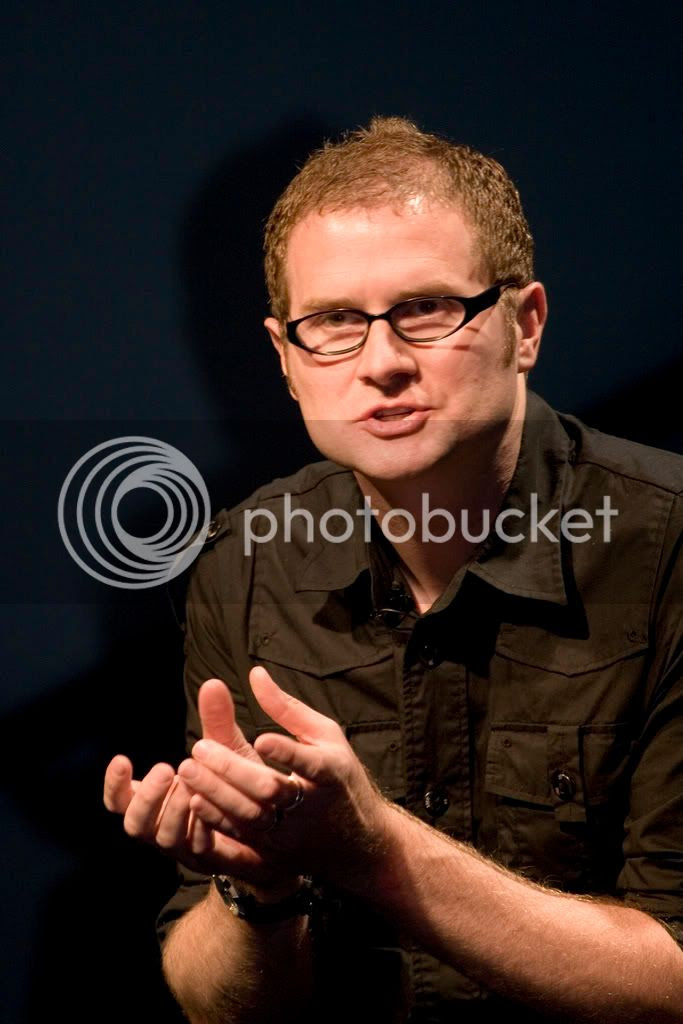 Sorry about missing the Tuesday 19th event at church.co.uk. The planned 22nd date sold out in a couple of weeks so we added another date, but I had to go the States a the same time. By all accounts it went well. Rob was also able to take some time this week and talk with the staff from Tearfund and Oasis, two organisations who do an excellent work and reflect much of what this tour is about.

The 22nd of June was a great time. As well as spending some time with the staff from Oasis, who are based in the offices above Church.co.uk, Rob was interviewed by Premier Radio, Youthwork magazine and the Church Times. This reflects the breadth of interest in in Rob and the way in which thinkers such as Rob, Steve Chalke, Jim Wallis and others are breaking down the old religious boundaries within Christianity.
The event was great - another sell-out - and Rob was able to take some time at the end talking and praying with a number of people. We have had a relaxing weekend in London, and tomorrow we head off to Southampton for the next date.
See you then!
Posted by Ian Matthews at 12:04 pm No comments:

Manchester ... so much to answer for

Wow! There was so much energy tonight. This was at the 1100 seat Tameside Hippodrome, and was again pretty much a sell-out. The audience did the north proud - loads of energy and feedback, even a wolf whistle for Rob!

The team was introduced to the great British delicacy of Fish and Chips (that's deep fried battered cod and fries soaked in salt and vinegar to the American friends), so the carb count was high, high, high - ha ha. The crew at the venue were wonderful, really professional and made it such an easy experience.

The real highlight was a full page feature in the front part of the Manchester Evening News - with the great line - "Christianity is Rob's Rock'n'Roll".
Posted by Ian Matthews at 10:50 pm 2 comments:

Following the hectic first day of arriving into Belfast, opening night nerves and a performance all in one day the two day trip into Dublin was really relaxing. Wednesday was spent exploring this amazing city, an incredible blend of the traditional and the very modern.

Thursday night performance was in St Mark's, a 250-year-old converted Church off the tourist trail. The venue seated around 400, and the shock on the faces of our local team was palpable as it filled up 30 minutes before the show - apparently this has never happened for ANYONE there before! In many ways the feel of the venue was very different. After playing to a venue seating 1000 or so in Belfast, 400 people all within eye contact made for a more intimate evening. When Rob spoke about the practical ways that we can show Shalom, the audience spontaneously broke into applause and the key word from many of those attending was 'inspiring'.

We are on the plane now flying over the Irish Sea to Manchester for the performance there tonight - from one legendary city to another.
Posted by Ian Matthews at 10:48 pm No comments:

Rob and co all arrived safely yesterday afternoon, somewhat later than planned after a 3-hour wait in the plane on the tarmac at Newark!

Tonight was in Belfast, at the Spires Conference Centre, right in the city centre and the turnout was unbelievable! We opened the doors at 7pm, and the steady flow of people meant that we weren't far from filling the 1000 seat venue! We had sold all 800 issued tickets, but more people came and paid on the door.

Rob came on stage exactly at 8pm to whisltes, cheers and applause for the first night of this tour, and immediately launched into a great evening where he showed. from scripture, all that the Shalom of God means, bringing it right down to the practical needs of people around the world.

The response of the audience was amazing - and it was really moving to hear stories from all the people who are going out and making a difference in their communities, at least partly inspired by Rob's books and NOOMA.

Today we move on to Dublin and have a free evening tonight before speaking at St Mark's, an old converted Church - now a music venue - tomorrow night.
Posted by Ian Matthews at 7:40 am 1 comment:

I'm very bad. I am sorry I haven't blogged for a while.

Anyway - on Tuesday I go off on tour with Rob Bell on the Calling All Peacemakers tour. The first stop is in Belfast on Tuesday at the Spires Conference Centre, followed by Dublin on the Thursday (14th). We then fly back to the UK, with Manchester on the 15th - I then disappear off to Grand Rapids for a few days - before two London dates on the 19th and 22nd, Southampton on the 25th, Cardiff on the 26th, Wolverhampton is the 28th, Glasgow the 30th and finally Cambridge on the 1st July. Whew!

It is exciting - we have exceeded ticket sales already on the first half of the tour, and the second half looks like it will follow suit.

So ... with this in mind I do plan to keep blogging during the tour giving a 'backstage' view of the events.